Here are 10 potential ways to achieve a 50:50 ownership split, even when the JV partners’ contributions are inherently unequal. 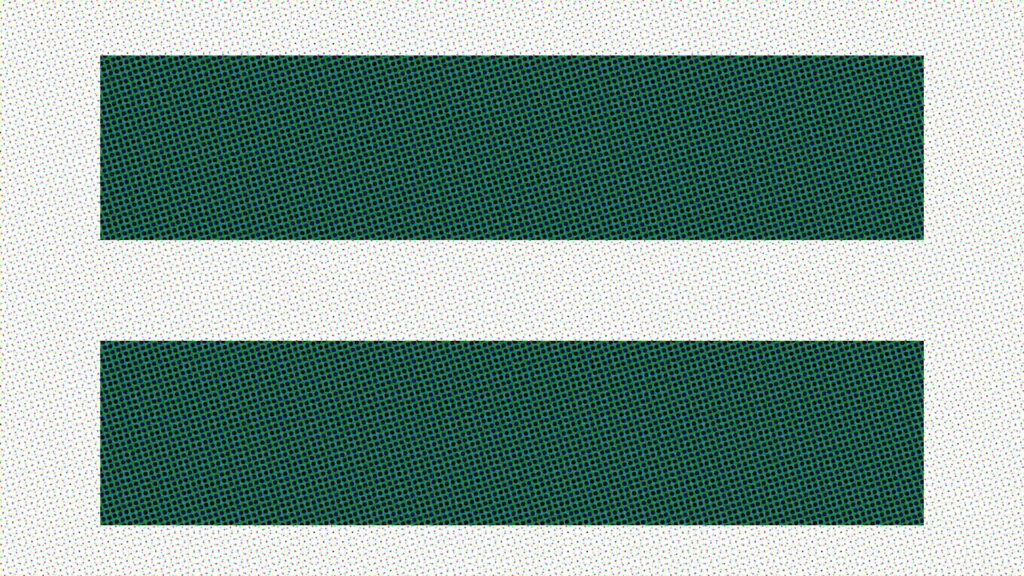 August 2016 — JOINT VENTURE NEGOTIATIONS pose many unique challenges to dealmakers. One common challenge is how to achieve an equal ownership split when the parties’ contributions are inherently unequal. In many two-party deals, such as Royal Dutch Shell-Cosan, Bosch-Siemens, GE-Mubadala, TNK-BP, and Samsung-Corning, creating a 50:50 joint venture is a core requirement for one or both parties. But initial valuations don’t always support such a split due to differences in the scope and scale of contributed assets or businesses, disagreements on the valuation of hard-to-value intangible contributions (e.g., local regulatory contacts, brand reputation, trademarks, etc.), or inability to share information about black boxed intellectual property contributions. When valuations diverge, three things can happen:

Typically, parties opt for choice three. And this leaves dealmakers searching for ways to reach 50:50 ownership while providing fair consideration for unequal contributions. The purpose of this note is to introduce 10 potential pathways to do just this (Exhibit 1). 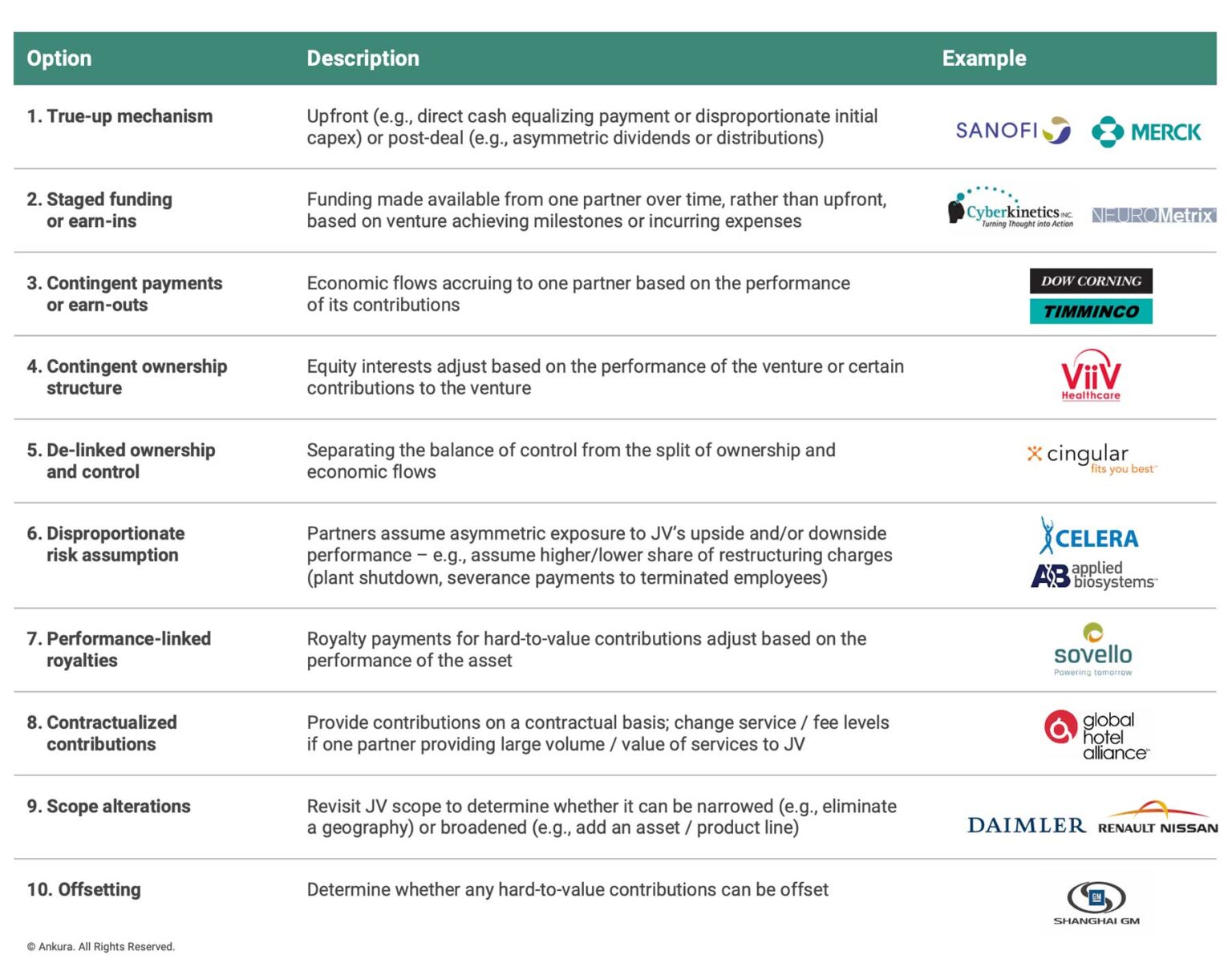 To illustrate, consider the true-up mechanism – the first of three common pathways. Prospective JV partners can negotiate a true-up mechanism, either as an upfront true-up payment (i.e., a direct cash equalizing payment or disproportionate initial capex contribution) or a post-deal payment (i.e., an asymmetric dividend, distribution, or future capex requirement). This is what Merck and Sanofi-Aventis negotiated in a deal to consolidate their respective animal healthcare businesses into a JV equally-owned by the two companies. The enterprise value of the Merck business was $8.5 billion versus $8 billion for the Sanofi-Aventis business. To address the gap, Sanofi-Aventis made a true-up payment of $250 million plus other contributions to reach a 50:50 ownership split. The JV would have been the largest company of its kind in the world had regulatory and other challenges not blocked the deal from moving forward.

Liberty Global-Vodafone also used a true-up mechanism, in their JV deal to create a national unified communications provider in the Netherlands (i.e., video, broadband, mobile, and B2B services). These partners anticipated this deal would realize synergies with estimated NPV of €3.5 billion after integration costs, or a run-rate savings of €280 million per annum by the fifth full year of operations. While the partners negotiated a 50:50 ownership split, the valuation of their contributed assets did not support such a split. Based upon the enterprise value of each business, and after deducting €7.3 billion of net debt from Liberty Global, Vodafone was still short €1 billion. To true-up this valuation gap, Vodafone made a one-time payment of €1 billion to equalize its ownership stake in the JV.

The second pathway is staged funding or earn-ins. This is where one partner funds their share over time, rather than upfront, based on the venture achieving certain milestones or incurring certain expenses. Cyberkinetics-Neurometrix was a 50:50 JV to develop products for treating nerve injuries. Not only did Cyberkinetics contribute intellectual property and know-how, it also agreed to license a key piece of technology to the venture that resulted in a higher initial valuation than its partner. To compensate, Neurometrix agreed to fund the first $2 million of program costs, and any required funding beyond the initial $2 million was to be shared equally, according to the 50:50 ownership split. However, dealmakers should consider one caveat to staged funding and earn-ins: Whether the partner holds their full 50 percent ownership stake to begin or accretes that ownership stake over time, in line with their capital contributions, is a matter for negotiation.

The third pathway – contingent payments or earn-outs – is a variation of staged funding or earn-ins. Rather than allowing the 50% partner with a higher valuation to defer their funding obligations, an earn-out enables that same partner to collect asymmetric economic flows from the venture over time, regardless of equal ownership stake. Companies often structure deals with earn-outs when the valuation of certain contributed assets is highly uncertain. Take EVO-PKO as an example: EVO Payments bought a 66% stake for $113.5 million in PKO Bank Polski’s eService merchant acquiring business. As part of the 20-year JV agreement, the partners planned that eService would expand into other countries in Central and Eastern Europe, a possibility which would significantly increase the value of its contributed merchant acquiring business. Accordingly, the agreement provided eService with an earn-out opportunity based on future performance.

Reaching 50:50 ownership split is a common challenge. Luckily, there are many ways to skin the cat.

The author would like to thank other members of the Ankura team, upon whose original thinking this article is based.

The Strategic Imperatives of Getting a JV Off the Ground

No Conflict, No Interest: Pricing Affiliated-Party Transactions in Joint Ventures

The many commercial relationships between a JV and its parents can cause JV partners to butt heads. Here’s our advice on how you can design these relationships to keep the peace.