Joint Ventures and Partnerships: The Year in Review – and Ahead

This snapshot of record-breaking JV and partnership activity in 2022 keeps you updated on recent trends and helps you plan for what’s to come in 2023. 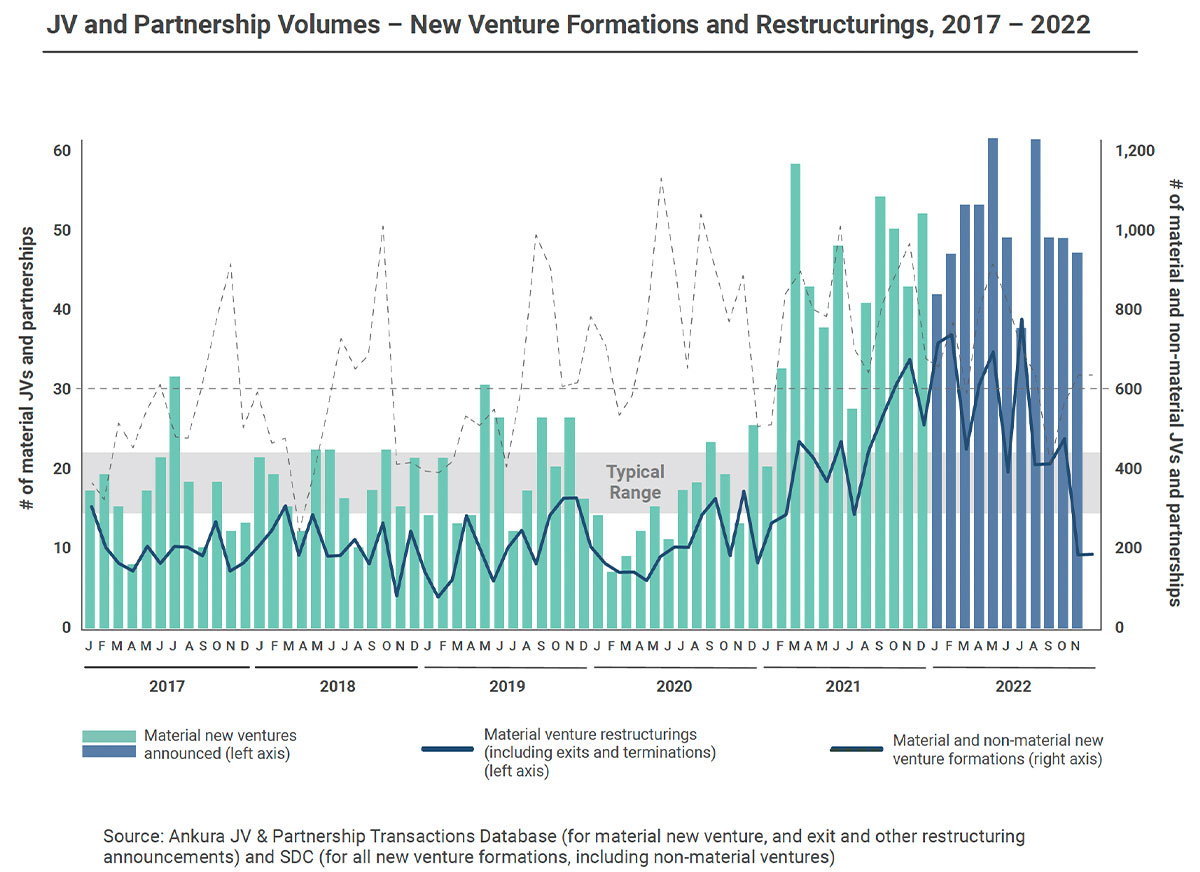 No rest for the weary. Unlike our friends in investment banking and corporate M&A who are enjoying leisurely holidays (albeit with smaller bonuses), the heady days and nights of dealmakers working on joint ventures and partnerships show no signs of relenting.

Bucking the year’s step-back in M&A, the volume of new joint ventures and partnerships remained strong across the year, with 2022 outpacing 2021, which shattered historic records. We see no signs of this changing as we enter 2023, where the macro forces driving partnerships remain in place.

The year included some extremely large transactions, including GSK and Pfizer IPO’ing their consumer health joint venture, Haleon, that valued the venture at approximately $36.5 billion, making it Europe’s biggest listing in a decade. It also saw a series of restructurings and exits, including the rapid unwinding of many joint ventures in Russia by companies like Ford, Shell, and Uber. And Volkswagen emerged as our Dealmaker of the Year, based on a combination of large new transactions and exits.

DEALS OF THE YEAR

Here’s our take on the dozen largest or coolest deals of the year:

DEALMAKER OF THE YEAR

Volkswagen is our pick for Dealmaker of the Year. The German automaker announced several partnerships across the electric vehicle value chain and in autonomous vehicles in 2022. VW is selling a minority stake in its US electric vehicle recharging business to Siemens at a valuation of more than $2 billion. It plans to install 8,000 fast-charging spots across Europe by 2024 in a partnership with BP. The company is teaming with Nevada startup Redwood Materials to recycle batteries in the US, forming joint ventures with Huayou Cobalt and Tsingshan Group to secure nickel and cobalt supplies for electric vehicles in China, and planning a joint venture with Bosch in battery production systems. It is also considering a partnership with Foxconn in electric vehicle manufacturing in North America. In autonomous vehicles, the company scrapped its partnership with Argo AI, while expanding its collaboration with Mobileye and entering a nearly $3 billion joint venture with one of China’s leading designers of artificial intelligence chips, Horizon Robotics, to accelerate the development of AI-assisted and driverless cars.

JV and partnership transactions have shifted into a new gear, achieving and sustaining unprecedented velocity over the last 24 months. Partnerships have emerged as the transaction vehicle of choice for companies to access and commercialize innovation, with an explosion of recent partnership activity most notable in financial services, consumer goods, and food and agriculture – joining sectors like life sciences, healthcare, and tech, which have long relied on partnerships to generate new products and technologies. JVs and partnerships have also become central to developing more sustainable businesses, as we have seen automakers using partnerships to build electric vehicle value chains from scratch, while oil companies using partnerships to move into renewable energy, including wind, solar, and hydrogen. The frenzy is poised to continue.

How We Help: Trends

James Bamford is a Senior Managing Director and Global Leader of Ankura’s Joint Ventures & Partnerships Practice at Ankura based in Washington, DC. He joined Ankura with the firm’s 2020 acquisition of Water Street Partners, which he co-founded in 2008. Water Street Partners has been independently ranked as the number one global advisor on joint ventures since 2017. Prior to Water Street, he was global co-lead of the Joint Venture & Alliance Practice at McKinsey & Company.