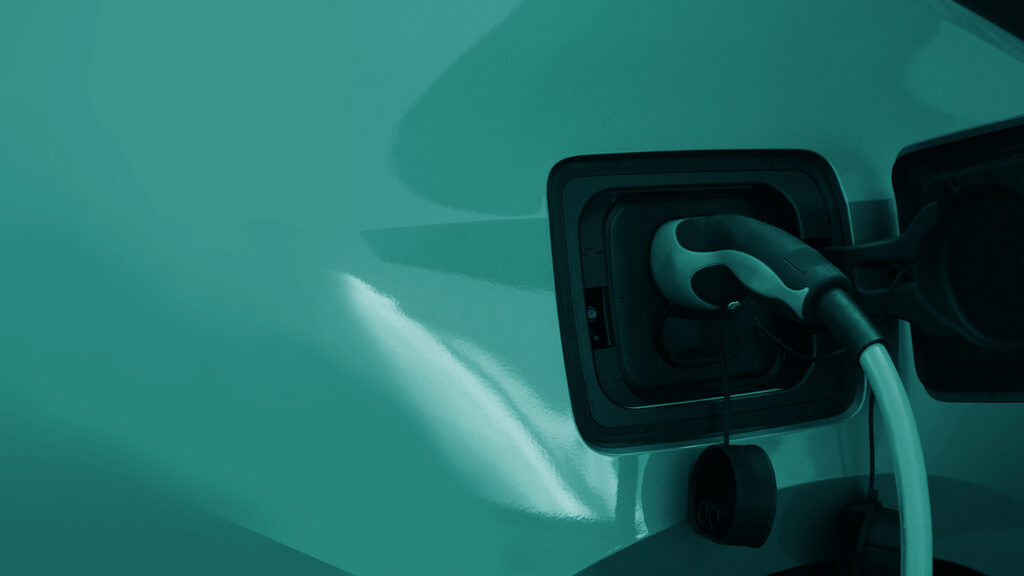 OCTOBER 2022 – Joint ventures and partnerships are driving the auto industry’s transition to electric and autonomous vehicles and materially contributing to the market valuation of most industry players – with industry leaders partnering at rates outstripped only by a handful of other corporate sectors.[1]See, “Partnership Makers & Shakers, Ankura’s 2022 Scoreboard of Corporate Partnering Activity,” James Bamford, Shishir Bhargava, and Peter Daniel

Exhibit 1: JV and Partnership Activity Across the Automotive Industry

Electric vehicles (EVs) have driven 56% of the new JV and partnership activity since 2016, led primarily by deals scoped around the battery – the most important, expensive, and complex component of an EV. Companies like GM, Ford, and Volkswagen are partnering at blistering rates to secure supplies of critical battery materials, speed the commercialization of solid-state battery technology, build out networks of charging stations, recycle used batteries, and most importantly, lock in guaranteed access to battery volumes by sharing the multi-billion-dollar capex requirements of large-scale production plants. For General Motors, this means a joint venture with LG, Ultium Cells, to build 3 battery plants in the U.S., each with more than $2 billion in investments, while Ford is pursuing a similar path with SK Industries, including multiple JV plants in the U.S. and Turkey.

Fuel cells featured in only 20% of the new automotive JV and partnership deals, with partnerships like Cellcentric, the JV between Daimler Truck and Volvo that is developing fuel cell systems for use in heavy-duty trucks. Automotive companies are increasingly placing their bets on this green technology alternative to batteries through partnerships – and typically for commercial vehicles, which require a greater range and shorter refueling times that hydrogen fuel cells can provide.

Autonomous vehicles (AVs) made up just 13% of new deal volumes in 2021, down from nearly 30% in 2016. The enthusiasm and frenzied deal activity around AVs from a few years ago is waning as companies struggle to refine the technology and build business models around it. Companies are also increasingly unwilling to stay invested in existing partnerships with uncertain returns on potentially heavy investment commitments – which triggered a wave of restructurings. Magna and Lyft ended their collaboration in self-driving vehicle technology, as did Volvo Cars and Veoneer. But the growing demand for trucking services, a tight supply of human drivers, and an easier-to-master non-urban operating environment has made self-driving technology attractive to truck manufacturers. Many are lining up technology companies as partners to develop self-driving systems – like Volkswagen’s Traton, which is collaborating with TuSimple, and Isuzu with Gatik, to develop self-driving trucks.

Partnership activity in traditional ICE vehicles is dominated by partial divestments, consolidations, and restructurings, set off by the twin pressures that are weighing down the global OEMs: the pressure to invest billions on innovations that are likely years from reaching scale or returning profits, while balancing the need to promote traditional vehicles that generate investment capital against the stated objective of managing their future decline. Restructurings of JVs and partnerships in traditional vehicles have been responsible for 42% of all restructurings in the industry since 2016. The easing of regulatory restrictions in China – where many of the world’s automotive JVs are concentrated – is also contributing to the restructuring of underperforming ventures in the country. Renault alone, for instance, initiated the financial restructuring of its JV with Chinese automaker Brilliance, cancelled its JV with Chinese automaker Dongfeng, sold over a third of its Korean unit to China’s Geely, and pledged to pool more resources into its long-standing alliance with Nissan.

Which automotive companies were the most active partnership makers and shakers, and which companies the least? 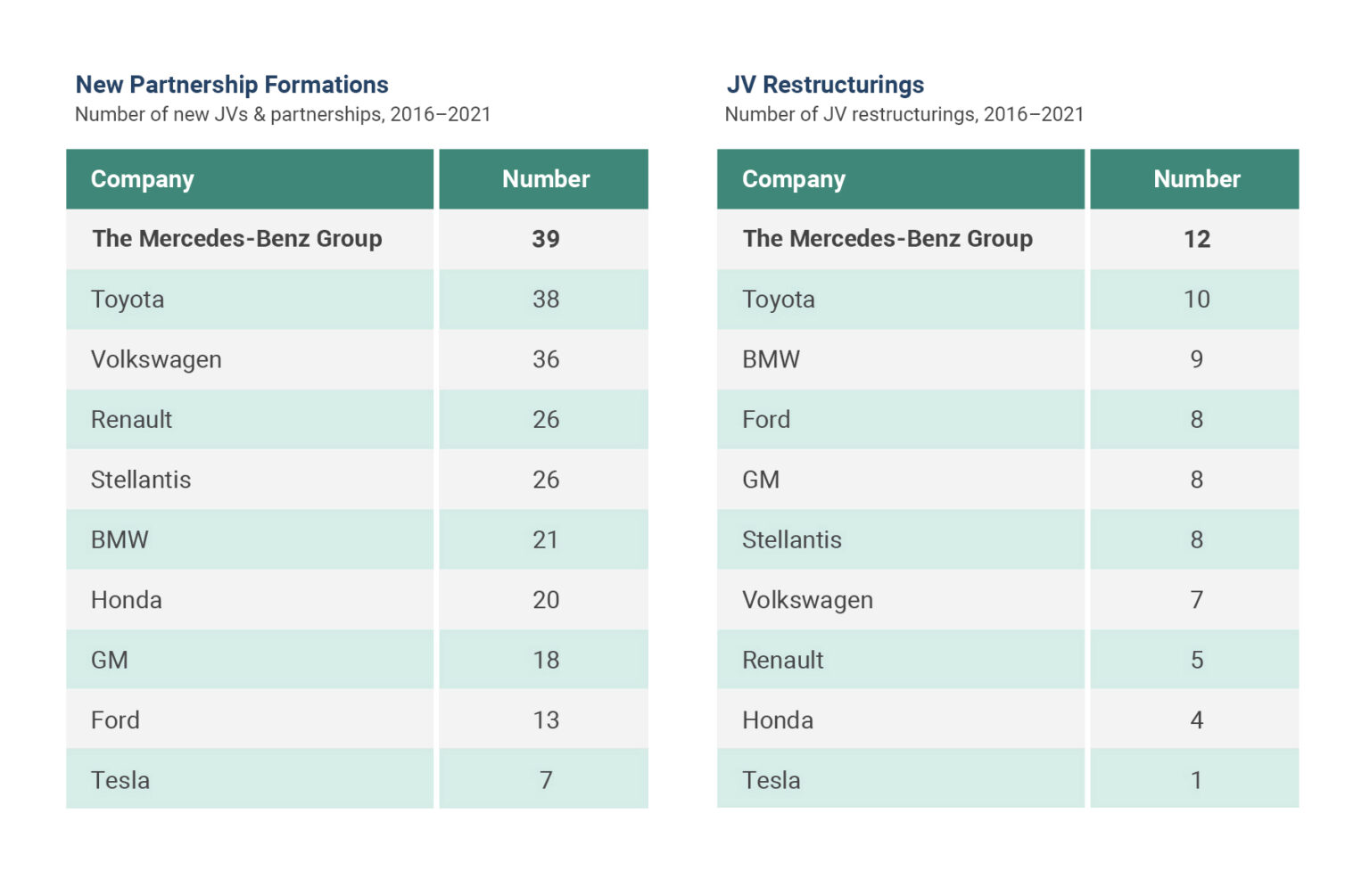 The stock markets reacted positively to JV and partnership activity by industry players – both for new deal announcements and restructurings.

Of the announcements for new deals since 2016 with a statistically significant stock price impact in our data, 61% had a positive impact on at least one partner’s share price, and 40% had a negative impact (Exhibit 3)[2]See “How Stock Markets React to Partnership Announcements – And What to Do About It,” Lois Fernandes, Saadhika Sivakumar, and James Bamford, The Joint Venture Alchemist, June 2022. Average positive abnormal returns were 5.3%, and average negative abnormal returns -3.8%. General Motors’ new partnerships with General Electric in rare earth material supply chains, POSCO in electric vehicle battery materials, and Pure Watercraft in electric boats, for example, were all cheered by the markets – and each generated positive abnormal share price returns for GM greater than 4%.

Of the announcements for restructurings since 2016 with a statistically significant stock price impact, 72% had a positive impact on at least one partner’s share price, and 31% had a negative impact. Average positive abnormal returns and average negative abnormal returns were 4.5%. The stock markets, for instance, cheered multiple restructurings involving Daimler (now the Mercedes-Benz Group). The company’s expansion of its partnership with CATL for the development of truck-specific advanced batteries and unwinding of Your Now, its mobility services partnership with BMW, gave the company 3-5% in positive abnormal share price returns each.

The stock market’s reaction to JVs and partnerships in the automotive industry compared favorably to all other industries. Fifty-nine percent of announcements for new deals across all industries had a positive impact, and 44% had a negative impact. Cross-industry average positive and negative returns for new deals were, respectively, 6.1% and 4.7%.

New joint ventures and partnerships will continue to power the future of the automotive industry. There is no better time than now for industry players to hone their capability at the front-end of deal making to – both, creatively and efficiently – originate, screen, shape and close deals.

At the same time, a still evolving industry landscape, performance challenges, and competing priorities will continue to exert pressure on the joint ventures and partnerships that exist. There is no greater urgency than this to encourage industry players to actively govern and proactively restructure or exit their JVs and partnerships.

Joshua Kwicinski is a Managing Director based in Washington, DC. He has more than a decade of experience in advising on all aspects of the partnership lifecycle, including deal strategy, transaction structuring, ongoing governance, and restructuring/exit. He has advised senior executives and dealmakers at both a corporate and individual JV level across a range of industries, including oil and gas, metals and mining, aerospace and defense, financial services, biotechnology, and others.

Mark Savage is a Senior Managing Director at Ankura based in London. He specializes in the creation and operation of new businesses, with a particular focus on joint ventures and alliances. He has over 20 years of experience in deal advisory services and four years in industry, setting up and operating joint ventures. This combination has given Mark a unique insight into joint ventures and alliances, and a true understanding of what makes them a success or failure.