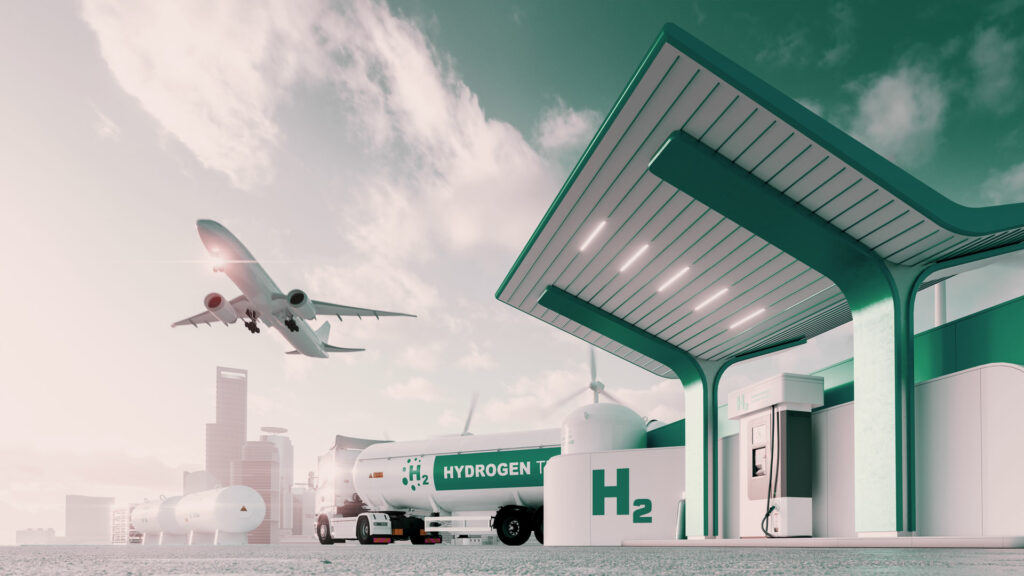 JUNE 2022 — HYDROGEN IS THE MOST abundant element in the universe, comprising roughly 75% of all matter. It burns cleanly and could help decarbonize steel, cement, fertilizers, shipping, and other fossil-fuel intensive industries. As a green fuel, it’s possible to produce without generating CO2 emissions. And it’s a mobile form of large-scale energy storage, offering an alternative to lithium batteries that could allow renewable energy to be used far from where it’s produced.

More than 30 countries have announced strategies to promote the adoption of hydrogen, pairing $40 billion in potential subsidies with promised regulatory shifts to promote, encourage, and cajole adoption. Companies have responded with more than $300 billion in promised investments across all the “colors” of hydrogen, but green hydrogen is the holy grail.[1]Different forms of hydrogen production are referred to by different colors. Gray hydrogen is the traditional method used by industry and releases CO2, while blue hydrogen takes the gray process and … Continue reading

Green hydrogen is also a technology and market in its infancy. Like the early days of wind and solar, it’s wildly expensive – up to 16 times more expensive now than gray hydrogen.[2]Analysis from the International Energy Agency as of 2019 It faces an uncertain battle to reach cost parity and convince companies to move forward with investing that depends on a combination of technology maturity, cost reductions, and regulatory subsidies.

To realize its potential, companies will need all sorts of partnerships. This article examines the drivers and patterns behind partnering in green hydrogen and shares key questions and challenges for companies looking to succeed.

Enter your information to view the rest of this post.

Five years ago, green hydrogen barely registered, but as companies and governments seized on a 2050 target date for zero carbon emissions, green hydrogen emerged as an alluring path to cut global emissions by a third.

Given the uncertain economics in the face of billions of investment capital needed to build out the green hydrogen value chain – including developing renewable energy, creating factories for electrolyzers (which split water into hydrogen and oxygen), constructing hydrogen production facilities, developing transportation infrastructure, and converting end users to utilize hydrogen – companies immediately turned to partnerships to share costs and risks. And with promises growing of investment dollars into green hydrogen, annual new partnership announcements tied to green hydrogen also grew – to 47 in 2021, with announcements for 2022 in Ankura’s database set to exceed that pace (Exhibit 1). 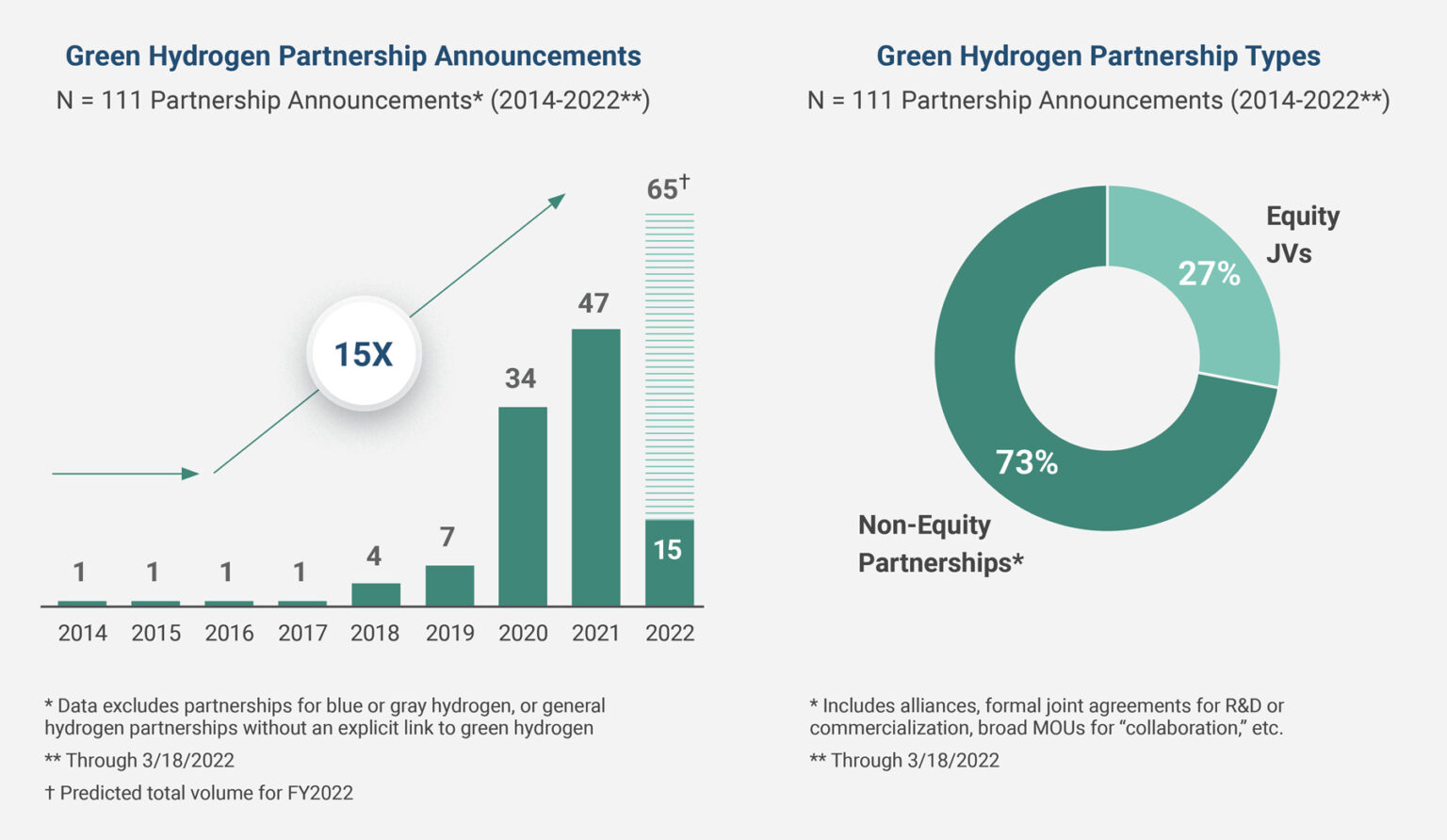 Risk and cost-sharing aren’t the only things driving partnering. Other reasons to collaborate in green hydrogen include:

As the volume of green hydrogen partnerships grows, a common set of participants are emerging (Exhibit 2). Renewable energy utilities, oil and gas companies (who are seeking to diversify into “energy companies”), and pure-play green hydrogen project developers find themselves partnering at essentially every step of the value chain, seeking to bring the entire industry into existence in parallel. They’re joined by technology providers, who offer the engineering and equipment to generate green hydrogen and use it as a fuel; infrastructure partners, who enable it to be shipped; and customers, who can apply it to decarbonize their own business, from steel to mining to mobility (including aircraft, locomotives, and vehicles). 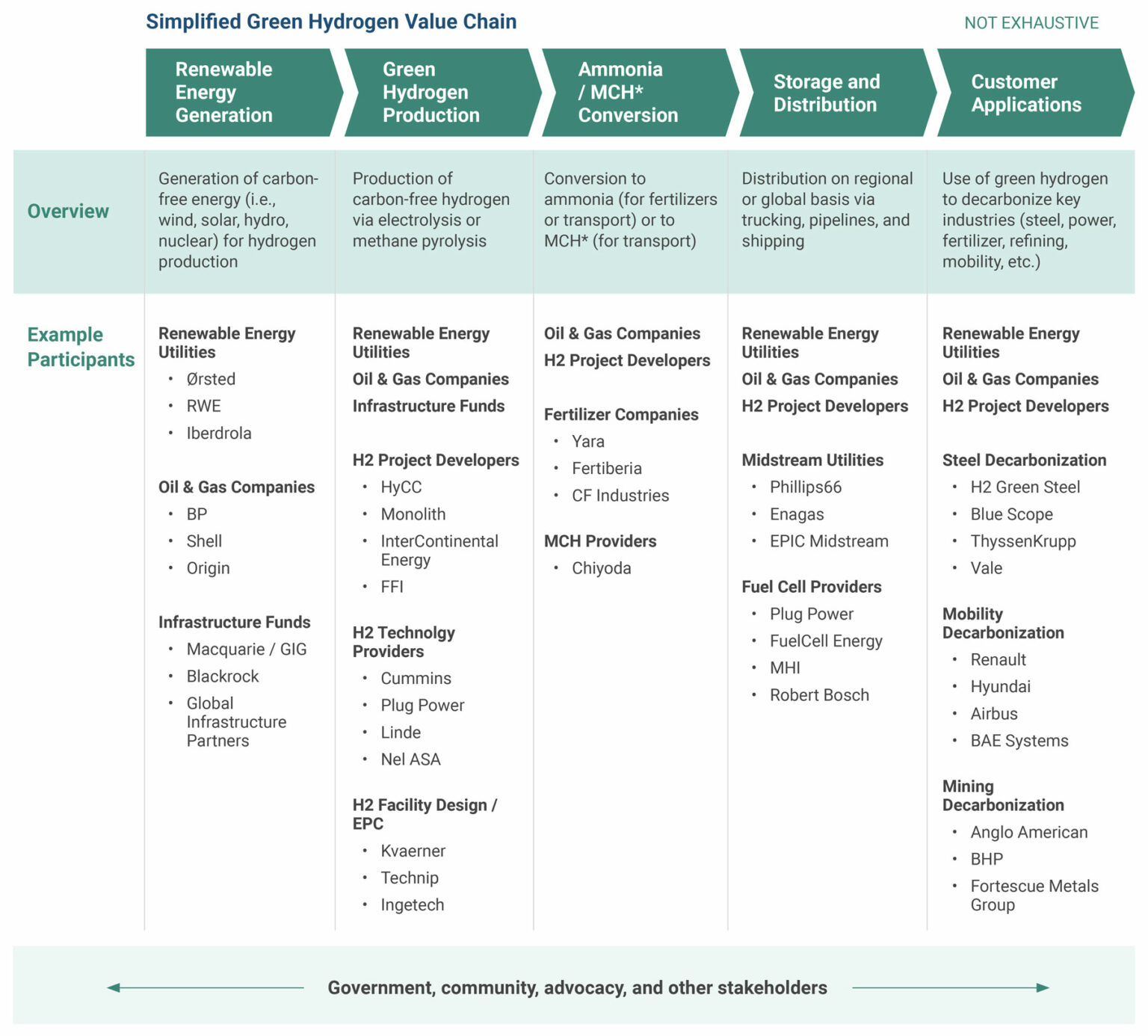 Despite common participants, the partnering looks very different depending on where companies primarily reside in the value chain. Those that view industrial-scale green hydrogen production as a core strategic objective are partnering differently than players who view green hydrogen as an enabler for their broader business.

Despite a handful of partnerships focused solely on funding, building, and operating a production plant, most companies focused on industrial-scale hydrogen production are being pulled to partner across the entire value chain, driving a significant share of new green hydrogen partnerships (Exhibit 3): 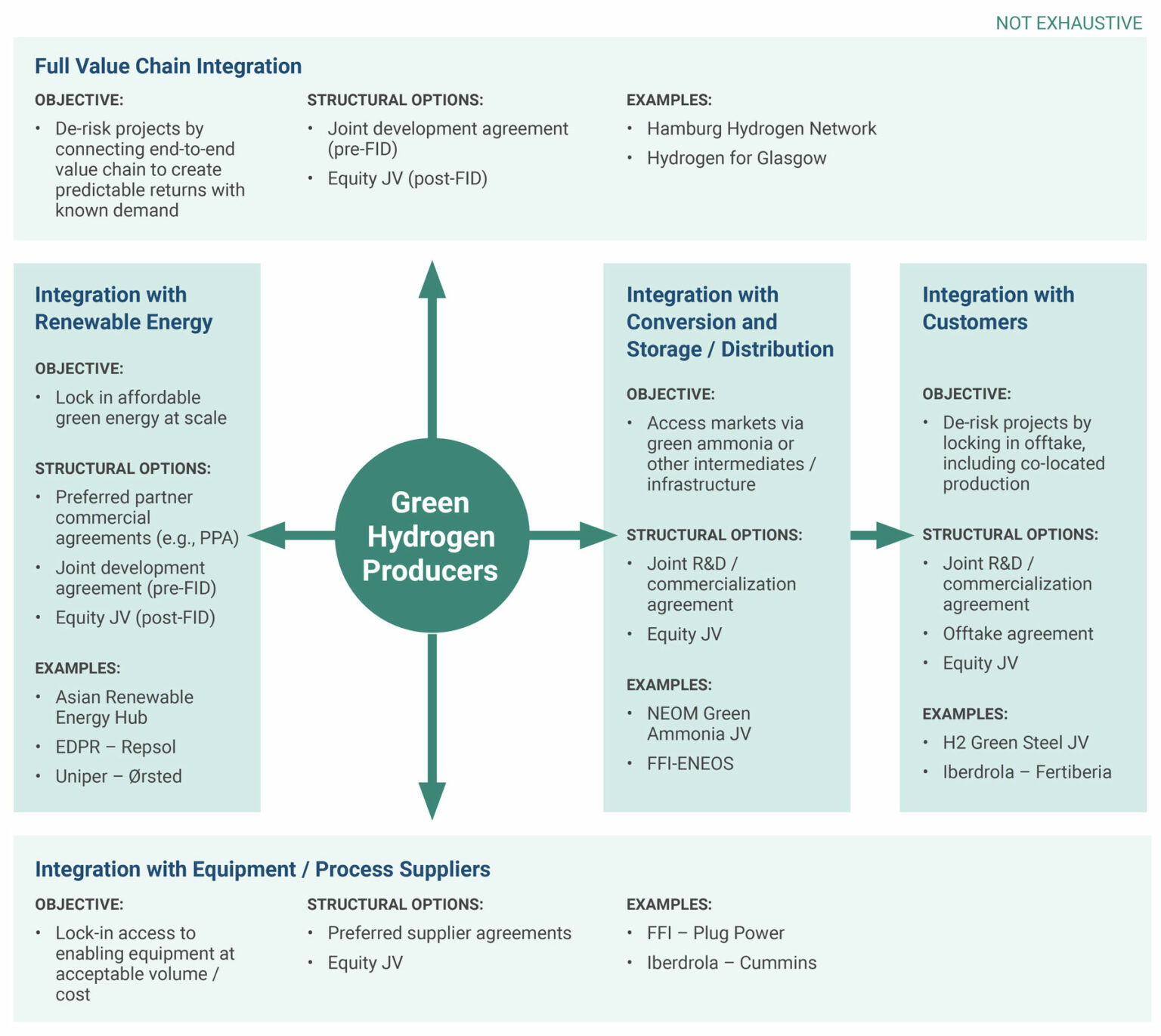 Other players in the value chain see the partnering landscape differently:

KEY QUESTIONS AND CHALLENGES FOR COMPANIES

With green hydrogen partnering on the rise, companies that can identify, negotiate, and structure partnerships more effectively than their peers are likely to have a competitive advantage in the green hydrogen economy. Having served companies across the emerging green hydrogen value chain, we believe they need solid answers to the following:

Look into the portfolio of companies investing in green hydrogen today, and you’ll inevitably find partnerships. Given the capital involved, the technological and market uncertainty, and the inherent risks of a frontier market, partnerships have emerged as a foundational tool for dealmakers. To paraphrase an adage, if you want to go fast, go alone – but if you want to go far in green hydrogen, go together. Has your company thoughtfully planned how to do it?

How We Help: Trends

Joshua Kwicinski is a Managing Director based in Washington, DC. He has more than a decade of experience in advising on all aspects of the partnership lifecycle, including deal strategy, transaction structuring, ongoing governance, and restructuring/exit. He has advised senior executives and dealmakers at both a corporate and individual JV level across a range of industries, including oil and gas, metals and mining, aerospace and defense, financial services, biotechnology, and others.

Geoff Walker is a Senior Managing Director at Ankura based in Washington, DC. He joined Ankura in 2020, following Ankura’s acquisition of Water Street Partners, which he co-founded in 2008. Water Street Partners has been independently ranked as the number one global advisor on joint ventures since 2017. Geoff has extensive experience structuring and restructuring joint ventures and advising clients on maximizing the value of their joint venture portfolios. Geoff serves a global client base primarily of companies in the natural resources sector, including oil and gas, metals and mining, chemicals, utilities, and alternative energy. He is a regular, featured speaker at industry and corporate events and has written extensively on joint ventures.